Review: Worth the Risk by K. Bromberg

14 May Review: Worth the Risk by K. Bromberg 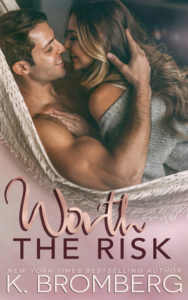 I’ve been (im)patiently waiting for Grayson’s book since meeting him and his brother’s in Cuffed. I was dying to get to know him—something about that helicopter pilot/single dad lure that I knew would draw me in.

And draw me in he did! He’s an amazing, dedicated dad. Loves his family—tolerates the gentle (and not so gentle) ribbing and interference of his brothers and parent. And absolutely loves his job. He’s got it all, or so he thinks . . . until Sidney comes back into town.

Sidney’s a bit of an enigma. She grew up with a silver spoon in her mouth, and was the typical pretty, stuck up girl in high school. But she moved away ten years ago. And in ten years a whole lot can happen. And people can change. And Sidney has changed. Or so she’d like everyone to think. She just needs to prove it to her father, her boss and really herself, while resurrecting the magazine.

But if she can’t convince Grayson to be part of the Hot Dad contest, how will she really save the magazine and prove herself worthy of that coveted editor position?

So, straight up honesty here . . . I struggled Worth the Risk. I really liked Grayson and Sidney. But it took quite a while for them to grow on me as a couple. It took a while for me to really see them together. There was so much angst, so much disbelief and self-sabotage for them both. There were times when I really didn’t know if they’d end up together. But what saved things for me was their mutual adoration of Luke, Grayson’s son. That little scene stealer was the glue that really held it together for me. Where both Grayson and Sidney’s softer sides were shown in their interactions with Luke. And finally, I started to believe they’d have their HEA. But it took a bit.

And their relationship was definitely Worth the Risk. ~ Missy, 3.5 stars